The first time I tried elm was 2018, but at that time my frontend experience was still very small. At that time I had implemented a larger project in react and gained my first experience with vue. Elm had just overwhelmed me and I didn’t know the concepts. So I was choosing to react all the time. For my private projects as well as for my professional ones.

My first fundamental functional experience was at the university with haskell. At that time I was overwhelmed from it like 2018 with elm. It was a completely different approach than OOP with Java or some basic lowlevel C. I hated it.

Then, 4 years later and 3 years more professional experience, I saw this talk from Richard Feldman. It opened my eyes. I had already some experience with rust in a professional context and was already hooked to functional programming. But I didn’t see any need for pure functional for frontends. I mean, you already can write functional components in react, so why bother?

Then I remember all the pain of debugging and searching for issues with react components. How often does a component does not rerender or show its state because of some misconfigured or misused useState hooks? How often did I forget to not use useState with an object instead of spreading the values? So I wanted to give it a try.

First, it was the same pain with elm as it was back in 2018 when I just wanted to bang my head against the screen or a near wall. But then I understood the concept of elm. It is just the same as with redux. There are messages, there is a model and there is a view based on the model that can trigger new messages. That’s it. There cannot be anything else. The view always represents the model. There cannot be a model, that is not currently represented as a view and there cannot be any value in the model, that is not also in the view. The messages can be sent from the view, but the view cannot change the model in another way than over a message. Everything is strictly typed and is a function. It is super easy and complex at the same time.

It is explained nice in this image from plaxdan: 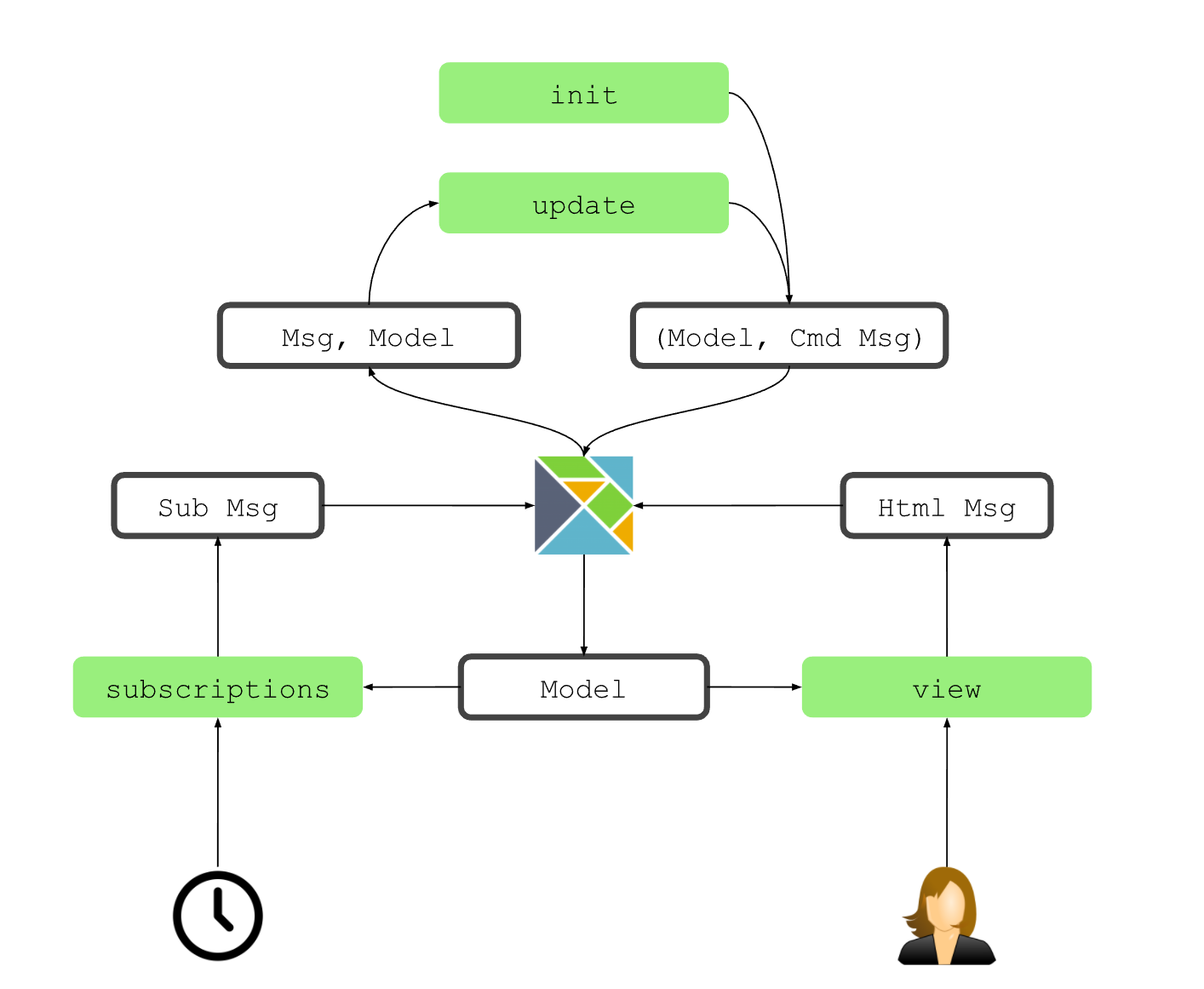 And this is already the base concept. So I did some beginner tutorials, some starting projects, and easy hello-world pages. Then I did a small frontend for a ticketing system, but also really basic. To learn it in more depth I wanted to create something nice. Some real-world page. I saw the basic-computer-games repository and could not find any elm implementation. So I took the challenge and build the first game Acey Ducey in Elm. And then also another one Awari, just for fun and for me. You can find these games live here: Acey Ducey and Awari.

To understand the basic concepts of elm I can highly recommend the elm-guide. Here is a super easy example:

A more detailed and more complex example is the Awari game.

Some more interesting resources I found helpful while learning elm:

The part with css is more complex. There are different ways of doing so. I preferred the Html.style usage, since it is easy to use. But it is not typed and I am missing an easy-to-use SCSS usage. If I will use it in the future and have an easy example, I will create a post about it.

Also really helpful was Elm-live. With the ---debug command you can easily jump between the states and take a look at the views. It helped a lot during dev, also with the proxy command --proxy-prefix=/api --proxy-host=http://localhost:8080/api. My standard command during dev was: elm-live src/Main.elm --proxy-prefix=/api --proxy-host=http://localhost:8080/api --open --start-page=resources/index.html -- --output=app.js --debug. This build the Main.elm file into the app.js and opened my start page. I also used and index.html file to include some external resources.

That is all for the moment. I am really in love with elm as I was with svelt after I used it the first time. There are new languages, frameworks, and concepts all the time. I try my best to be open-minded and think there is a better way of frontend development than react. Until now, I saw multiple ones. I would prefer svelte and also I would prefer elm. At the moment I would prefer elm over all the others. Mostly because of its type secure and immutability. But in projects, it always depends on the environment. For myself, I choose elm over all the others. For projects with clients and coworkers who have no experience in elm or in functional languages in general, I think React is still the most spread library to use.

A big thanks go to Richard Feldman and Annaia Berry for these amazing talks and super lectures!

I am a bit proud, that my first bigger elm projects are already example code for basic-computer-games and I hopefully will use elm more in the future. If you have any suggestions or questions, feel free to reach out to me.